Jablonski’s writing “employs secrets and intrigue as a driving, page-turning force. … [He] is able to inject a sense of immediacy and intensity in the story by using sparse description that suggests more than it tells.” Publishers Weekly

When novice climbers Trevor and Gaspar attempt Mount Silenus they discover that inspiration from a famous book makes a poor substitute for experience. Accuracy is important on mountains, especially one darkened by legends of a prehistoric sloth — the Abominable Unau — and the indigenous people who make sacrifices to it. As the text bears less and less resemblance to the terrain, squabbles over its interpretation become a battle of faith vs. reason. Those are best fought on flat surfaces.

Why does a man climb a mountain? To taste the distilled essence of life, to glimpse the clandestine maneuvers of his soul, and because he believes everything he reads. For two high school teachers who skipped their climbing classes, a masterpiece advocating spontaneity over skill proves irresistible. Unknown to them, the reclusive author honed his technique scaling barstools and brooding over the unjust fame of Nietzsche. He ignored eyewitness accounts of the Abominable Unau for stylistic reasons. Stories about wrathful apparitions infesting a labyrinth of caves didn’t make the cut either.

During a quixotic journey in the general direction of the summit,  Trevor and Gaspar join a scientist investigating paranormal activity on one of the plateaus. The book fails to warn about traps set by the mountain people to protect the sacred site from desecration. When they fall into icy catacombs they must confront the source of the legends to survive.

They squeeze between amber stalagmites and squat beside a man whose patience abandoned him before his spirit. An ice axe remains frozen in his hands, its tip slathered with the red lacquer coating his face. The holes in his forehead could be mistaken for spider eyes.

“What was the hurry?” says Trevor. “I heard death by hypothermia is painless.”

“How does anyone know that?” says Gaspar. “Were volunteers assigned different ways to die and asked to rate them?”

Their breath expands and dissipates in the cave, joining frenzied thoughts long ago freed from the ice man’s skull. The flashlight summons forms from the void like a wand brandished by sorcerers. A mushroom of ice towers over them, its oak-thick stem withering below a luminescent rotunda. The shapes on the ground are not rock formations. Not yet.

“Look what some of them are wearing,” says Trevor. “I’ve only seen gear like this in old pictures.”

“They didn’t fall in at the same time. Look what else they have. Does that book look familiar?”

“What an interesting coincidence.”

“I see the beginning of a pattern,” says Gaspar. “I’d say this warrants skepticism of the remaining chapters.”

“What else would they have been reading, a book on beekeeping?”

“They should have. It’s an interesting hobby with few casualties.”

“How could waiting to die be the lesser evil?”

“No accounting for taste. Maybe they came back after going down there.”

The passage descends toward a purple light surging beneath chandeliers of fused crystals and aborted supernovas. Calcite nubs protrude from the path like hands reaching for their ankles.

“My survival instinct says we should be a bit more proactive. Patience hasn’t been an effective strategy here. I’ve heard of waiting rooms but this is ridiculous.”

“Dr. Zardeen was next to us when the crevasse opened. There’s no sign of him.”

“Doctor, did you notice a group of climbers in the passage back here?” shouts Trevor.

“They might need first aid,” says Gaspar, “but take your time.”

“They are quite dead. They were probably too frightened by what’s over here. Hurry, gentlemen. This is what I have been looking for.”

Strange light caricatures Gaspar’s and Trevor’s silhouettes as they approach, as if in mockery, making them appear no less fantastic and alien as the indigenous formations. In darkness the ice men continue their vigil, rebels holed up against the army of time, saved by an intercessor no less ruthless. 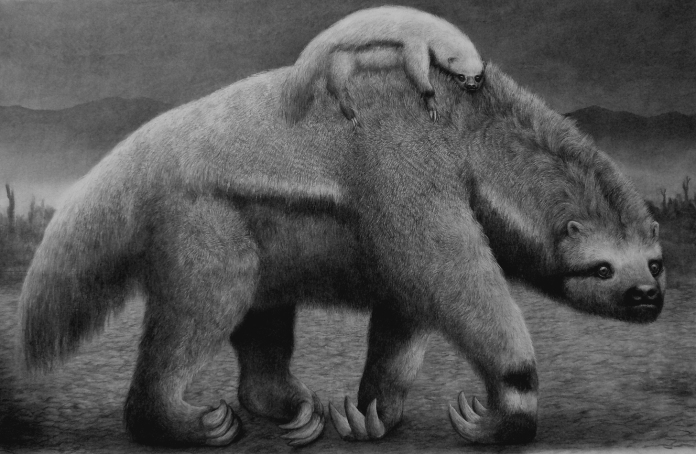 One thought on “Mount Silenus”