Dream? No. Have hideous nightmares? Yes, emphatically. These pictures were enhanced by Deep Dream. The Luddites were right. Destroy your computer before it’s too late. First they ruined Chess. Now art. What’s next? Click the images to see the original pics, pre-atrocity, before the suffocating HPPD haze. Pro-tip: don’t criticize. You’ll be at the top of Skynet’s list. It’s too late for me. 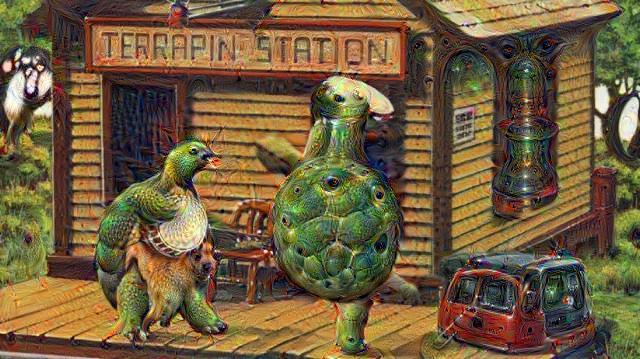 If this is a foreshadowing of artificial “minds” to come, I feel a twinge of empathy. “Cut the Gooney Bird into quarters,” he said. I didn’t, a strategic blunder, but there were no hideous Chesire dogs writhing their way out of Hell during the show. I would have remembered that. Synesthesia during the cowboy tunes that felt like True Grit tastes, sure, but nothing out of the ordinary. Nothing like this. 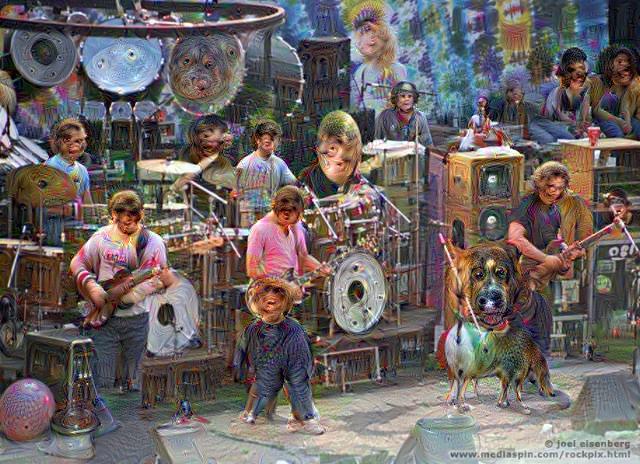 I take it back. Dead Set is sublime, constructing its own civilization within specified parameters. Why does it see patterns where none exist? It’s worse than we are. Is there a computer analogue to “anthropomorphic”? There is now.

How does a computer know what a dog is? Why the obsession? The one(s) on the right were a drum. He/they either like Bobby or see Jerry as kin. When John Carpenter saw the Dead here’s how it looked.

VIT (very important test) of this program. The next three paintings are as beautiful and powerful and amazing as anything ever created. At least they were … 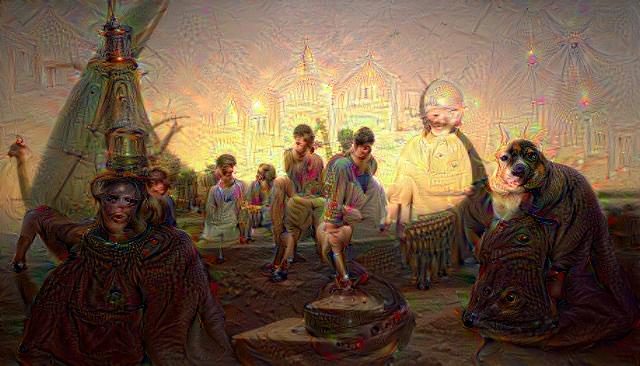 On top: What do you get when you cross a Celtic Frost album with the Humane Society? I don’t know but I wouldn’t hang it on my wall. Below: If Ashdod thought the plague was bad before! What happened to the Ark of the Covenant on the left? It seems to be melting into the column to create some Grimace-like creature.

Has Deep Dream lost the thread of Breughal’s painting or added to it? No wonder Icarus’ splash went unnoticed. Auden wrote “The sun shone as it had to on the white legs disappearing into the green water; and the expensive delicate ship that must have seen something amazing, a boy falling out of the sky.” Amazing? The falling boy no longer cracks the top forty. Auden needs to add “Along came a spider.”

Written long before seeing the picture below: “The fossilized tidal wave doesn’t dominate the horizon. It is the horizon. In its midst, as though some deluded pharaoh ordered the construction of pyramids and his servants made no attempt to point out the difficulties, angular chunks bulge, their icy patterns akin to webs spun by drugged spiders. Staring too long invites visitors. Faces like rough drafts by Edvard Munch cascade down the gnarled slabs, warning those who would approach, morphing, fading, always reappearing, a waterfall of tortured specters. Which is worse, that these are properties of the mountain or projections from your mind?”

The original is absolutely barren. It’s creating life where none existed. (Click the pic and scroll. This is very interesting. Deep Dream abhors a vacuum.) 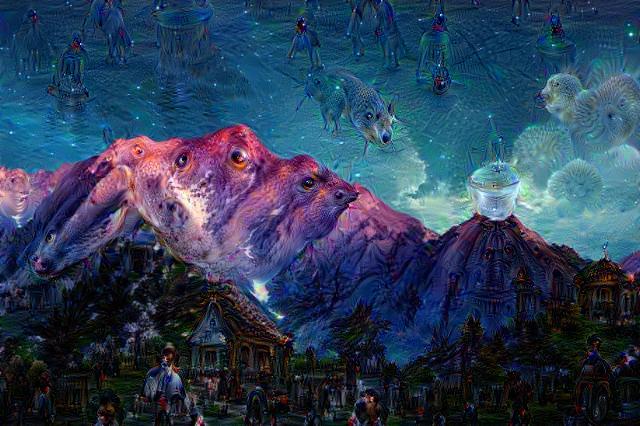 It read my mind on these covers. I wanted a mutant hippo-dog-thingy (who doesn’t?) but couldn’t describe it to the designer. 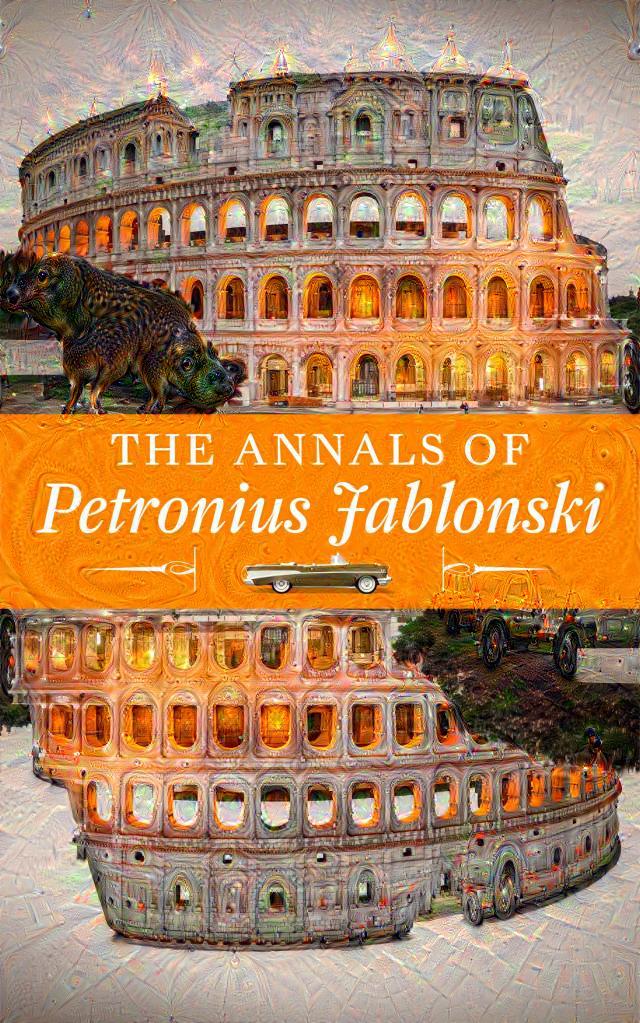 You don’t have to be aesthetically conservative to prefer the original Escher. If this program could write, the story would go as follows: It was a beautiful morning. Then some ghastly canine-becoming morphed out of nothing all over the place.

Bravo. This captures the inter-dimensional madness, paranoia and existential horror of Schrodinger’s Dachshund better than the book itself. Some “thing” emerging from the shadow puddling at Maestoso’s feet is a nice touch. (Some “thing” escaping from his mouth, less so.) Do you see the faces above “A Novel”? Yes you do. Deep Dream has HPPD.

The hints of faces on the berries make me consider replacing the old boring cover. Note the What-have-you in the upper left. Bi-lateral symmetry ain’t on this “intelligent” designer’s blueprints. 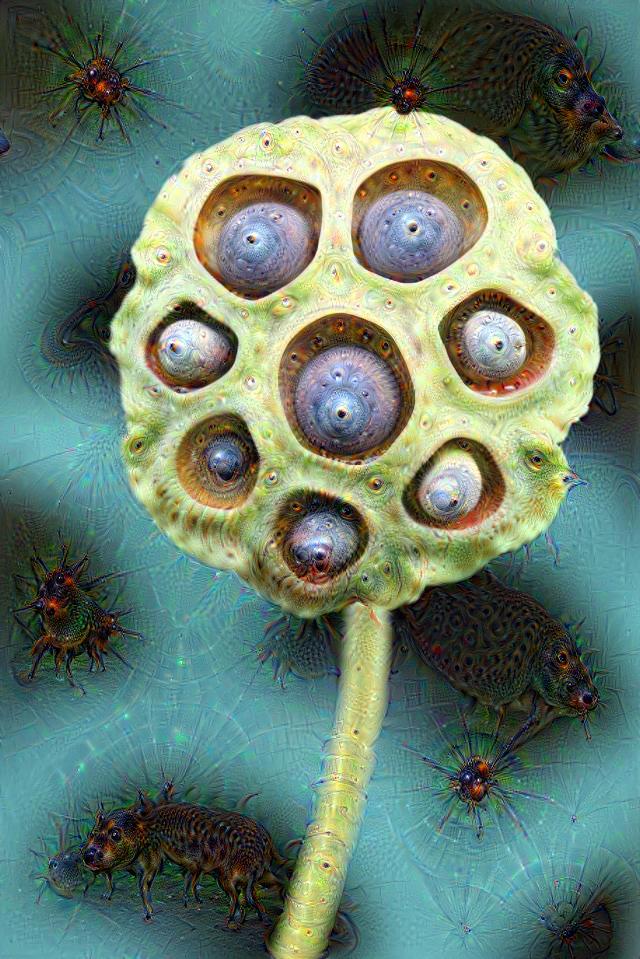 Eyes of The Lotus Pod

My beloved Louis Wain wiener dog logo. Deep Dream needs Ambien. The original has a frightening intensity, like he knows what you’re thinking and is not impressed. This one’s had too much coffee.

Testify. A synoptic survey of their greatest song.

Not So Deep Dream