Happy, if made so by its garish eye.
O’er earth’s wide surface take thy vagrant way.

They love not thee: of them then little seek,
And wish for readers triflers like thyself.
Of ludeful matron watchful catch the beck,
Or gorgeous countess full of pride and pelf.
They may say “pish!” and frown, and yet read on:
Cry odd, and silly, coarse, and yet amusing. 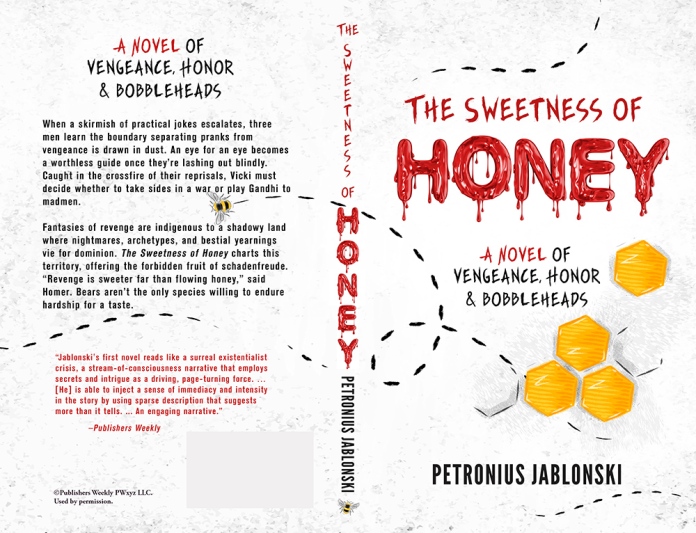 When a skirmish of practical jokes escalates, three men learn the boundary separating pranks from vengeance is drawn in dust. An eye for an eye becomes a worthless guide once they’re lashing out blindly. Caught in the crossfire of their reprisals, Vicki, a sarcastic hairstylist, must decide whether to take sides in a war or play Gandhi to madmen.

The bullied becomes the bully when Nelson pays Duncan and Tyler back for childhood torments. Such scores never stay settled. Duncan, an obsessive bobblehead collector, sees practical jokes as art. To Tyler it’s all about honor. After they retaliate, the sleep of forgiveness brings forth monsters: a blitzkrieg where suspicion dissolves alliances, mutually assured destruction is no deterrent, and unintended consequences mock all battle plans.

With war comes collateral damage. Hypnotized by a bobble-wielding Duncan, Vicki perpetrates a cruel prank against Tyler. Upon realizing she’s being used as a human IED, the enemy of her enemy becomes her boyfriend. Unknown is whether she’s chosen the right side, or if there is one.

Fantasies of Revenge are indigenous to a shadowy land where nightmares, archetypes, and bestial yearnings vie for dominion. The Sweetness of Honey charts this territory, offering the forbidden fruit of schadenfreude. “Revenge is sweeter far than flowing honey,” said Homer. Bears aren’t the only species willing to endure hardship for a taste.

One: Requiem for Gorillas